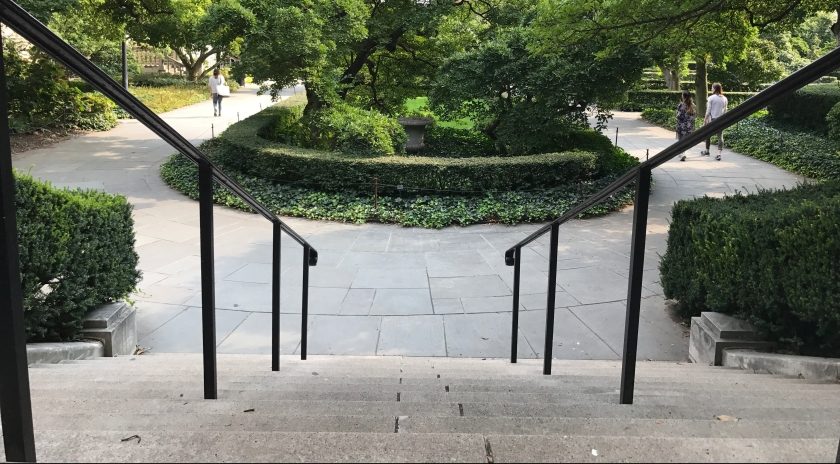 A little over a week ago I closed the chapter on a job I’ve had for eight years. It was a decision that’s been a long time coming, and despite how terrifying it is to not have a major source of income at this time, it was the best decision.

I spent the first week of “freedom” just being. I didn’t have specific plans. Just a list of things I wanted to do. Like start a bullet journal. Write more. Watch World Cup games. Read fiction books for a change. I actually thought I’d miss the routine of the job. The emails, the application checklists, the processes I created over the years. I thought I’d go through some kind of withdrawal. I did spend eight years of my life there, after all. But instead it struck me how easily one can leave a place–at least physically and logistically.  It only took me an hour or so to clean out my desk, file away some papers, respond to that last email. And the next day my email and phone were disabled. One day you’re there, and the next it’s like you were never there.

I was fortunate enough to work with some pretty amazing people many of whom became true friends. When big decisions were made that fundamentally altered our jobs, we stuck with it and did it well even though at times it felt like the office was going to fall apart. We shared a lot of laughs, some tears, and lots of beer. As proud as I am of the work I accomplished, it’s the relationships I built with colleagues and students that I will always treasure and treasure more. I think I lost sight of that in the past few months. I was so immersed in my own issues and thoughts, I wasn’t sure whether I was a good colleague, friend, or even a good person anymore. (Sometimes when you are that unhappy it affects everything else).

On my last day a mixture of colleagues, their families, and current and former students celebrated with me at a local restaurant. It felt like my birthday! But even better. Because by showing up they told me that I matter, and not because I happened to be born on that day. I matter on an ordinary day. I mattered to them. And they matter to me.

In the end, I could have left two, three even five years ago, but I think I was meant to leave now.

This site uses Akismet to reduce spam. Learn how your comment data is processed.

Here we go! Thank you all for the messages and for cheering me on. 🧡 You can catch the livestream on Goucher College’s YouTube page. Ceremony starts at 10:30! #gouchercollege2022
I’ve spent entirely too much time trying to come up with a caption for this photo and decided to just be direct: This Friday is Commencement and I’ll be sharing remarks as the Graduate Student speaker! 🎤👊🏽👩🏻‍🎓
For the past few months my time and head space have been occupied by my major paper—the final requirement of my graduate program in Arts Administration. I submitted a final version to my committee last week and found myself typing out some qualifiers: “it’s a very different draft from the first version; I like the direction of this one more.” I stopped typing and deleted it all. Even the message I was drafting in my head to the artists and arts leaders I interviewed was full of qualifiers: “it’s not groundbreaking work; I hope I did you justice; this isn’t my best work.” You get the point.
This month, like March 2021, has been unrelenting. But here’s a beacon of light: the newly released book, RISE: A Pop History of Asian America from the 90s to Now. Flipping through it for the first time was like watching my childhood, adolescence and college days unfold. Go get yourself a copy if you haven’t already. 👊🏽
Clouds. Because I feel like I’ve emerged from hibernation.
My cousins in the Philippines sent photos of their mini gathering a few weeks ago and it made me miss them and being around family so much. That, along with friends celebrating Lunar New Year with their inherited and chosen families, inspired this free write: